The DISC Assessment has been a go-to tool for testing job applicants across many industries since the early 1970s.

The test is named after the four major personality traits used in determining suitability for certain jobs: Dominance, Inducement, Submission, and Compliance.

It is thought that by testing someone and plotting their answers against DISC’s established personality patterns, a gauge of that person’ aptitude for a certain job can be established. Although the DISC test is currently the number-one selling personality test, it has delivered mixed results — especially with regards to sales positions.

Here is a brief rundown of some of the major pros and cons of the DISC Assessment:

In short, while the DISC Assessment can give some insight, it is not the best test to measure the natural aptitude and predict performance in salespeople and sales managers.

Why should I test at all?

The cold hard truth is that 50% of sales success is basic aptitude. That’s right…most salespeople are “born with it,” rather than trained to sell. Sales training is used to hone the skills they already have and take them to superstar level, but if they don’t have the natural talent — they will get nowhere.

So test your people! 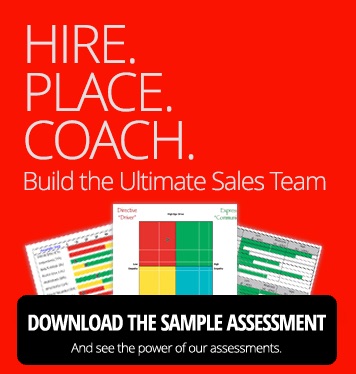